The Michigan Irish American Hall of Fame has announced its 2019 class of inductees.The Hall recognizes Irish Americans who have made important contributions in various fields in Michigan life. The honorees were inducted in a ceremony at noon on Saturday, September 14, 2019, at the Michigan Irish Music Festival in Muskegon, MI, on the Galway Stage.

Below are a few images of the induction ceremony. 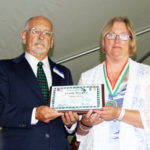 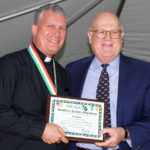 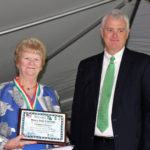 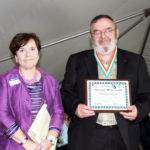 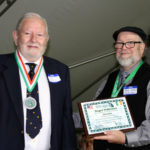 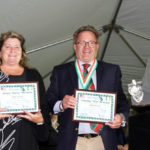 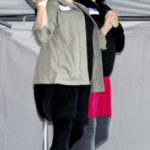 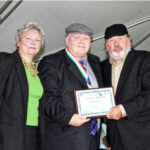 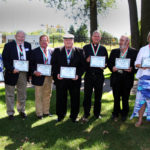 To view the entire induction ceremony, along with follow-up interviews with the inductees, click this YouTube Link.

In the category of Public Service, the Hall of Fame is honoring the most distinguished public leader in Michigan history, Frank Murphy. A native of the Lake Huron town of Harbor Beach, Murphy achieved the rank of Lt. Colonel while serving in the U.S Army in both World War 1 and World War II. After World War 1, he served as U.S. District Attorney for the Eastern District of Michigan. He next was elected as a Judge of Recorder’s Court in Detroit, and later was elected Mayor of Detroit. President Franklin Roosevelt then appointed him to serve as the Governor General and High Commissioner of the Philippines. Murphy returned in 1936 to be elected Governor of Michigan for two years, when President Roosevelt appointed him as Attorney General of the U.S.  In 1940 President Roosevelt appointed Murphy as a Justice of the U.S. Supreme Court, where he served for nine years until his death in 1949 at age 59.

Also in the field of Public Service,the Hall of Fame is honoring Austin “Barry” McGuire and Timothy “Tim” McGuire, the first father and son to be inducted as members. Barry McGuire, who died in 2012, was a U.S. Army veteran, and served as the Executive Director of the Michigan Association of Counties from 1968 until 1984, and Tim McGuire served as Executive Director of the Michigan Association of Counties from 1994 until 2016. Together they served a total of 38 years guiding and improving county government for the citizens of Michigan’s 83 counties. Barry McGuire also was the Executive Director of the Michigan Automobile Dealers Association from 1984 until his retirement in 2001. Both Barry and Tim McGuire were appointed to numerous governmental commissions and committees, and were respected by the leaders of both major political parties in Lansing and Washington.  Tim McGuire continues in his public service career as the Administrator of the Michigan Counties Workmens Compensation Fund. Both Barry and Tim have participated in many charitable activities, and Tim currently is a board member of Habitat for Humanity.

In the category of Arts and Entertainment, the Hall of Fame is proud to induct the preeminent Irish fiddler Michael “Mick” Gavin.  A native of Ireland, Mick Gavin immigrated to the Detroit area in the 1970’s. For the more than forty years, Mick has shared his love and talent as an Irish fiddler in Michigan.  Over the past decades, Mick has entertained at countless events, both Irish and non-Irish, and he has instructed numerous individuals including his own sons. Many of his students have gone on to win local and international awards. He has been a leader in the Detroit Irish Music Association, and has helped present cultural awareness programs in schools in the Detroit area. Through his performances and other activities, Mick shares his knowledge of Irish traditions, history, music, dance, and language.

In the field of Education, the Hall of Fame has selected for membership Roger Schlosser. Roger is the retired founder and Director of the Irish Studies Program at Grand Rapids Community College, believed to be the only Irish Studies Program at a community college in the U.S. In addition to his students studying on campus, Roger also took 14 groups of students to Ireland over the years. As part of those study trips, Roger arranged for the students to meet and interview many of the leaders on all sides of the Irish disputes.  As an author, Roger has written 3 historical novels related to the years of the Irish “Troubles.” He has also been the long-time President of the Gaelic League/Irish-American Club of West Michigan. As a side note, Roger built his home library to emulate the Long Room of the Trinity College Library in Dublin and his home library has 28 foot high ceilings!

In the category of Philanthropy or Community Service, the Hall of Fame is recognizing Nora Ann Cassidy for her service to the Detroit Irish community. For more than 40 years she has been a volunteer devoted to all areas of metro Detroit Irish activities. She has held offices and/or been a leader in The Friendly Sons of St. Patrick, the United Irish Societies, the Gaelic League/Irish American Club of Detroit, and currently is a Board Member of the Motor City Irish Festival.  She has been key in the success of the competition for the selection of The Queen of the United Irish Societies, the Court of St. Bridget, and the work in Africa of the Irish Pallotine Fathers. In her youth she was a distinguished Irish step dancer, and she coached her daughter to qualify for the step-dancing “All World Finals” in Galway. She has mentored and promoted Irish dance schools in the Detroit area. In 2013 she was selected as the Grand Marshal of the Detroit St. Patrick’s Day Parade.

Also in the category of Philanthropy or Community Service, the Hall of Fame is honoring Patrick J. Johnson for his service to the Irish community in Southeast Michigan and beyond.  He is the Executive Director of the Michigan Irish American Chamber of Commerce, and hosts a popular weekly Irish radio show from Detroit that also has national and international listening audiences, including Ireland.. He has been the owner of Shamrock DJ Services for more than 20 years. He often volunteers his services as Master of Ceremonies at the Great Lakes Feis in Lansing, the Glass City feis in Toledo, the Motor City Irish Festival, the Detroit St. Patrick’s Day Parade, the St. Patrick’s Senior Center Irish Festival, the Ardan Academy Celtic Extravaganza, and other events. In 2011 he received the John Heinzman Sr. award for his dedication and support of the Great Lakes Feis. He is an active member of many Irish organizations in the Detroit area.

In the category of Religion, the Hall of Fame is honoring Brother James Boynton. He is a native of St. Ignace, Michigan, and attended Lake Superior State College before joining at age 20 the Jesuit order to become a Brother. He devoted many years of his ministry to missionary work in northern India, Mexico, and Haiti, and with migrant workers in northern Michigan. For the past 20 years he has been a Religious Studies teacher at St. Ignatius High School in Cleveland and the University of Detroit Jesuit High School. He is also an accomplished Irish fiddle player, and was inspired by Irish fiddler Pat Bonner of Beaver Island, who is also a Hall of Fame member. Brother Boynton’s Christian life of service to others has been an example to all who know him.