Kevin Murphy has owned Murphy’s Restaurant in Redford, Michigan, for over 37 years. He is the co-chair of the Motor City Irish Fest, the Building Corporation Manager for the Ancient Order of Hibernians (AOH) Hall in Redford Michigan, a member of the AOH Stephen Walsh Division, Fraternal Order of United Irishmen and many Irish charitable organizations. Kevin is a member of the local band, the Jamrocks, and has been playing music at Mass since he was a teenager. Kevin is a past Pallottine Fathers Man of the Year, and a member of the United Irish Societies. When he is not running a very successful restaurant, Kevin volunteers his time organizing fundraisers for charitable causes in the Irish community and his local community at large. Kevin recently organized a fundraiser at the AOH Hall to benefit an orphanage in Poland to assist Ukrainian children displaced by the war. Kevin’s father James Murphy is from Dublin, Ireland. Kevin is a man of great faith and integrity. He is a valuable and respected person in the Detroit Irish community.

Erin Keem’s Irish heritage originates from County Clare, Ireland, and David’s from County Mayo, Ireland. Both are co- hosts of the Irish Music Cafe Radio Show. They both have held offices with the Gaelic League Irish American Club of Detroit, and the Irish Genealogical Society. In 2018 they were the Grand Marshals of the Detroit St. Patrick’s Day Parade. Erin is the corresponding secretary of the United Irish Societies and treasurer of the Ardan Academy of Irish Dance Booster Club. Erin is a past recipient of the Knights of Equity Irish Community Goodwill Ambassador award, and David is past President of the Fraternal Order of United Irishmen. They both currently serve on the board of the,Motor City Irish Fest. Dave and Erin are always volunteering at the Ancient Order of Hibernians and the Gaelic League, as well as for the Motor City Irish Festival and at the St. Patrick Senior Center, among other charitable organizations. They can often be found working as volunteers in the kitchen in supporting Irish and community events.

Sean Ryan was born in Clonakilty, Ireland, and raised in Youghal, County Cork, Ireland. As a young boy, he played tin whistle in the school marching band. In 1960 at age 12, his family immigrated to the U.S,, settling in the Chicago suburb of Mount Prospect, IL. While in high school, Sean played bass guitar for the popular Chicago garage band “The Shandells,” but later returned to his roots of acoustic folk music. While in college, he played thoughout Illinois, and performed with John Denver, Jim Croce, the Nitty Gritty Dirt Band, and Rick Nelson. After his college graduation, Sean eventually settled near Petoskey, Michigan, to pursue his musical career, including incorporating Irish music and story-telling in his repertoire. Sean performed in northern Michigan pubs and night clubs and other venues, culminating in becoming the resident headline performer for more than ten years in the Noggin Room of the renowned Perry Hotel in Petoskey. Attorney General Frank Kelley and legendary radio host J.P. McCarthy, both of whom are members of the Michigan Irish American Hall of Fame, were two of Sean’s most loyal fans. For over 40 years Sean Ryan performed his unique style of folk songs and Irish music and story-telling to entertain thousands of residents and tourists throughout northern Michigan and beyond. As a song writer, Sean wrote “Blue Diamonds,” the official anthem of the Michigan State Police. Sean was a founding member of the Robert Emmet Society in Petoskey. He was for many years a track coach, and played an important role in the Petoskey High School music program. Sean was also active in a number of charitable causes over his career. Sean is the proud father of his two children, Patrick and Kathleen.

Kathleen (Kitty) McNamara was raised in Eaton Rapids, Michigan, the 10th of 17 children. Her parents, Martin and Evelyn McNamara were from Michigan’s Upper Peninsula. Her Irish heritage stems from County Clare, Ireland. After attending Grand Valley State College to become a Social Studies teacher, Kitty started her teaching career on Beaver Island. She took a year off to continue her studies at the National University of Ireland Galway. Upon returning to Beaver Island, she resumed teaching. Kitty taught many subjects, including a Beaver Island History class. She was a founding member of the Northern Lights Athletic League. After teaching for five years, Kitty was promoted to principal / superintendent. She remained in that role for twenty-six years. Kitty inspired generations of Island students to reach their potential, know who they were, and celebrate their heritage. Kitty is married to Mike Green, and their daughters Brenna and Maeve are 5th generation Islanders. She is grandmother of four and aunt to many. Her professional career has seen her working for the U.S. Forest Service, crewing for the Beaver Island Boat Company, and running her own Irish imports business. Since retiring from education she has taken on the role of St. James Township Supervisor. She had long dreamed of having an Irish festival on Beaver Island. In 2019, as a founding member of the Beaver Island Irish Festival and Beaver Island Currach Club, she helped make that dream a reality. Kitty and Mike’s home is a gathering place for food, music, and fellowship.

Thomas A. Powers was a quintessential Irishman — witty, engaging and fun-loving. Butthis Irishman who died in May 2019 at the age of 76 was also a religious man, family manand a community man. Tom was an educational leader in every community in which heserved and school building in which he poured out his kindness and compassion. Tomwas born to Francis and Mary Powers in Marion, Ohio. The Powers (Le Paor) came to America from County Waterford in northeast Ireland. From Catholic high school in Marion and Mount St. Mary’s College and Mary Knoll Seminary, Tom received his undergraduate degrees from Ohio State University. He began his educational career teaching and coaching at Toledo Central Catholic High School before moving into community education leadership in Flint and Muskegon (Mona Shores). He furthered his educationwith advanced educational degrees from Eastern Michigan University and Central Michigan University. He returned to Catholic education as the superintendent of the Grand Traverse Catholic Schools before returning to Muskegon Mona Shores as an elementary principal. He finished his educational career as the superintendent of the Greater Muskegon Catholic Schools. Tom loved his “kids” and served students in ways few realized. In the community, he was a member of the Muskegon Irish American Society, volunteer for the Michigan Irish Music Festival, member of the Muskegon RotaryClub, past president of the Muskegon Exchange Club and United Way Campaign Chairman. Tom was known as a giver of his time, talents and treasures.

Michael Sean Hennessy, whose Irish roots are from County Cork in Ireland, was born on December 3, 1954, in Chicago. Not long afterward, his family moved to Kalamazoo, and eventually to Grosse Pointe, MI, where Michael graduated in 1973 from Grosse Pointe South High School. Michael had begun working in high school at Baskin Robbins, and was promoted to Manager in a very short time. Michael then attended the University of Michigan for a year and a half, and decided college was not for him. He returned to work for Baskin Robbins, and in 1976 Baskin Robbins offered him the new Baskin Robbins store in Muskegon, Michigan. He owned and operated that Baskin Robbins store for 5 years, and then sold it to become a Little Caesar’s franchisee in the Muskegon area. In the following years he opened 3 more Little Caesars locations. In 2011 Michael and his wife Nancy opened Hennessy’s Irish Pub and Restaurant in Muskegon, which is the home of the Michigan Irish American Hall of Fame. In 2014 he also opened the Boar’s Belly Brewhouse. In 2021, after more than 45 years in the restaurant business, Michael retired. During the course of his long hospitality career, Michael was always a hard-working hands-on leader whose example inspired countless young people whose first jobs were in one of Michael’s restaurants. Under Michael’s mentorship they learned the discipline and dedication they would need to succeed wherever their life’s work would take them. In the Muskegon community, if you were a successful “graduate” of Michael Hennessy’s school of doing whatever it takes to get the job done.

The new members for 2022 of the Michigan Irish American Hall of Fame were inducted at a ceremony at noon at the Michigan Irish Music Festival in Muskegon, Michigan, on Saturday, September 17, 2022. Below is a gallery of pictures taken on the day of the event. Activities included a breakfast in honor of the inductees, the induction ceremony on the County Kerry Stage, followed by a tea-room reception on the festival grounds.

NOTE: Click on any picture to start the slide show and use the arrows on the right and left to navigate the slide show. Tap the “esc” key to exit. 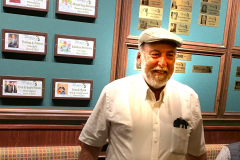 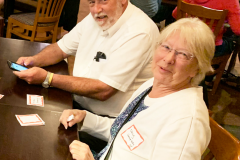 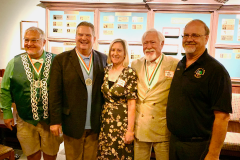 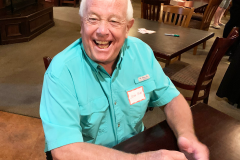 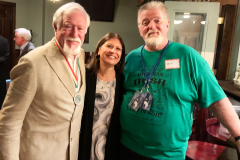 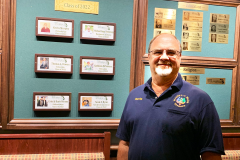 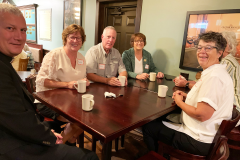 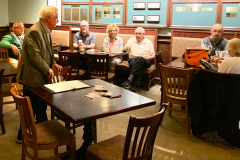 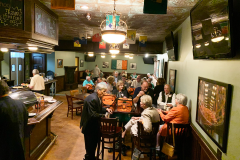 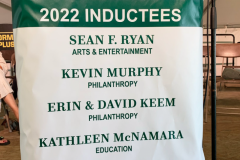 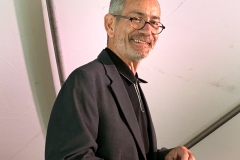 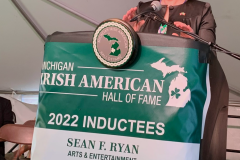 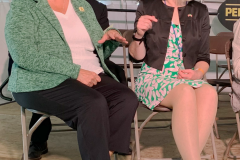 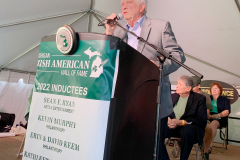 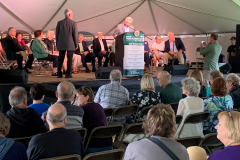 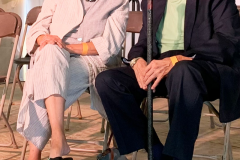 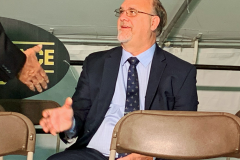 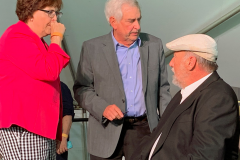 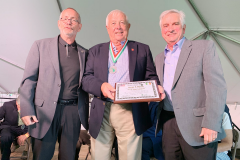